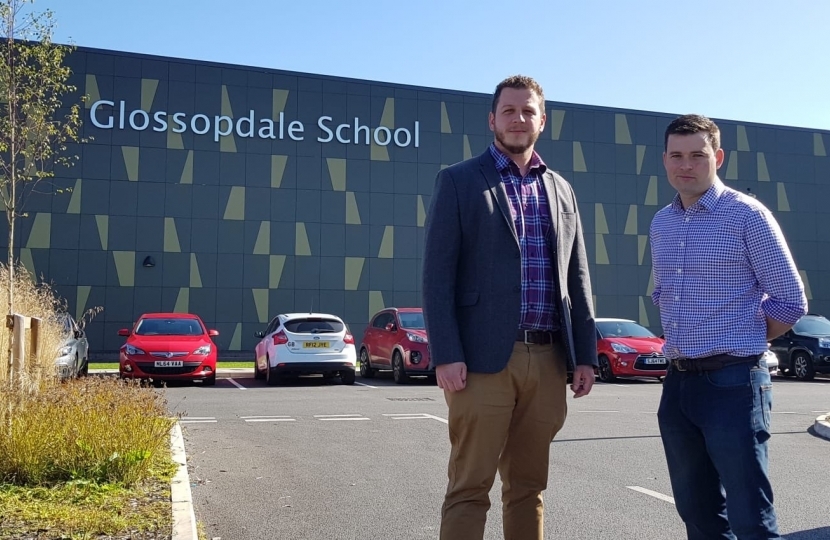 In addition, Derbyshire County Council have previously approved the £4m funding for the extension and have also now submitted the planning application for it.

Along with local residents, Conservative County Councillors Jean and George Wharmby have joined Robert Largan in campaigning hard and lobbying the Council to extend the school since the need for expansion was first raised by local residents over a year ago.

Speaking after the expansion was approved, Robert Largan MP said:

“I am very pleased that the Conservative Council have approved the expansion of Glossopdale School. This is the result of a huge amount of hard work from a wide range of local people and I am proud to have helped play a small part in this victory for children and parents. I want to publicly thank all those who have worked to deliver this.

“Councillors Jean and George Wharmby have also been very helpful in supporting the campaign, and have been working hard behind the scenes to push our case forward with the Council.

“I am still concerned about children due to start at secondary school before the expansion will be completed and will be urging the Council to do all it can to make sure all children are offered places at good local schools.”

“We are extremely pleased that Glossopdale School is to be extended. We have been lobbing behind the scenes from the first time we became aware of the pupil shortfall. We would like to thank Robert Largan MP and local parents for their efforts, as well as Cllr Alex Dale for helping to make it happen.”

“I’m very pleased that Cabinet colleagues and I have been able to approve the much-needed expansion of this school. I know that a lot of local families are anxious about the need for additional places, and I want to assure them that, once the planning application has been approved, we’ll be working really hard to complete the project as soon as possible.

“I want to thank all those parents and campaigners who’ve contacted me directly on this issue to let me hear their thoughts and views. I also once again want to thank Robert, Jean and George for working constructively with the Council and passionately putting forward the case for the extension on behalf of local families. They are a credit to Glossop and the local community, and I know they will continue to work constructively with the Council on this project until the extension is built.”

"'Delivery at pace' will be our mantra": Council Leader Cllr Barry Lewis sets out aspirational vision for next four years

In a powerful speech at Derbyshire County Council's Annual General Meeting on 26th May 2021, Cllr Barry Lewis set out his aspirational vision for the term of office: