Success for Conservative campaign to keep Chesterfield in Derbyshire! 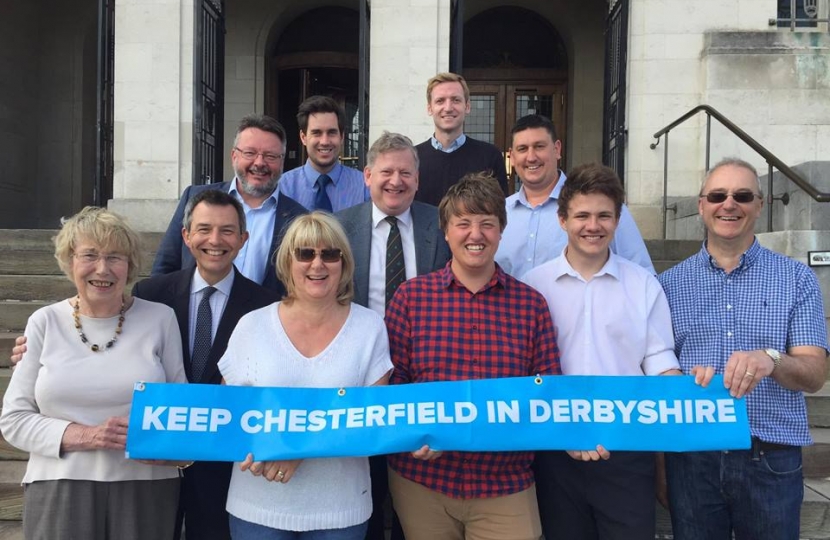 Derbyshire Conservatives are celebrating victory over Labour and Lib Dem plans to plunge Chesterfield into the hands of a South Yorkshire Mayor, after the Borough Council has announced it is withdrawing from the proposals.

The success came after several months of tireless campaigning by local Conservative activists in Chesterfield, including during the recent County Council elections in May.

Many believe the Labour Borough Council's decision to withdraw from the Sheffield City Region Mayoral plan came as a result of pressure from the newly-Conservative County Council, and its commitment to holding a referendum to give local residents a say, which had been announced for 21st June 2017.

Commenting, the Leader of the County Council, Cllr Barry Lewis said: "This is absolutely the right decision by Chesterfield Borough Council and a victory for common sense.

"Obviously we would rather not have to spend tax-payers' money on holding a referendum. But with so many people clearly not in favour of Chesterfield joining Sheffield City Region it was only fair and proper that residents were given the chance to have their say and give a clear indication of what they wanted for the future of their town and borough.

"If the plans had gone ahead there would have been untold costs to Derbyshire's tax-payers in delivering services in two separate ways - one way for Chesterfield and another for the rest of the county - and making sure they ran seamlessly alongside each other.

"We can now look ahead and concentrate on continuing to deliver services for Chesterfield and the rest of Derbyshire - the county to which the borough truly belongs.

"Chesterfield's decision opens up new opportunities for working in partnership and I look forward to discussing with Councillor Gilby how the county and borough council can work together in the future."