Our Manifesto for Derbyshire 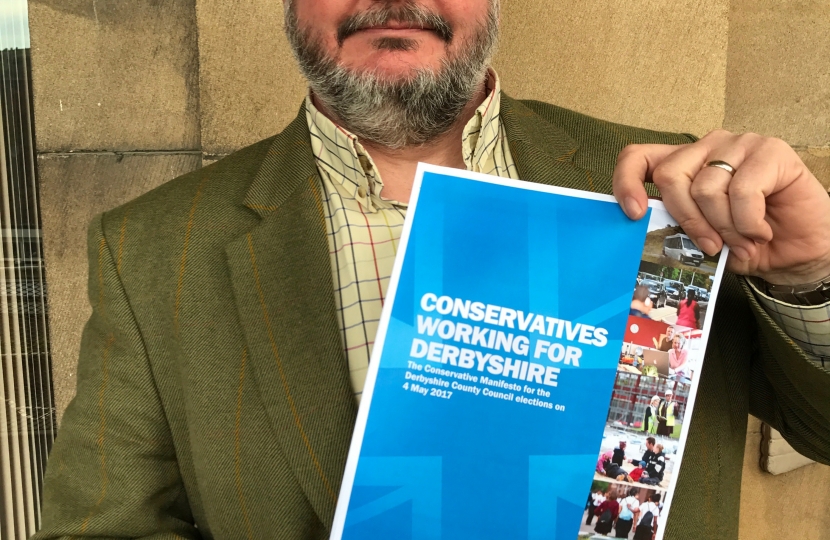 Derbyshire Conservatives have promised to protect local services and cut Labour's waste in their bid to win back control of the County Council in the 4 May 2017 elections.

Launched this week, the Conservative manifesto 2017 highlights their commitment to improve services, to return to open, honest and value for money local government and to undo the damage done by four years of hard-left Labour policies.

Attacking Labour's record at County Hall, Leader of the Council's Conservative Opposition Councillor Barry Lewis said: "Over the last four years we have witnessed Labour's broken promises and the damage it has inflicted on the Council and to important local services.

"Labour isn't working. And the Labour clique at the county council isn't interested in improving life for local people - their first priorities were to give themselves pay rises and spend a fortune refurbishing their offices.

"Even now they prefer to cut services while they stash money away in reserves - currently standing at a massive £233 million."

The "Conservatives Working for Derbyshire" 2017 manifesto promises to:

And Derbyshire Conservatives have pledged to:

In addition, they aim to provide 5,000 half day breaks for voluntary carers, Home Health, Safety and Welfare Checks for the over 80s and hundreds of grants for community safety and sporting activities.

"Our Manifesto puts local people first," said Barry Lewis. "We have focused on what is important to them and what is needed in our communities.

"We have created an exciting and innovative programme which is affordable and tackles issues of real concern to council tax payers.

"The plain fact is we can't afford another four years of Labour. Instead of doing what is right for Derbyshire, Labour indulges its left-wing dogma while spending millions on publicity and a so-called innovation unit that doesn't innovate.

"Only the Conservatives can stop this nonsense. We will protect services and restore openness, honesty and efficiency to the council."